Boyertown PA; The Little Town That Could

VISIT: Building a Better Boyertown. In the 1870’s the railroad brought prosperity to this town about 15 miles from Reading Pennsylvania, so it’s kismet that the revitalized Tourist Railroad is doing the same. The town’s largest employer,  Boyertown Burial Casket Company, opened in 1893, became the second largest coffin maker in the world in the 1960’s and 70’s, employing over 1,000, and producing over 60,000 caskets per year.  When the company closed in 1988, Boyertown fell into decline, but that was not the first tragedy the community-minded town had experienced. In 1908, the horrific Rhoads Opera House fire claimed the lives of 170 theatergoers and one firefighter who perished in an accident rushing to the scene – the area’s most devastating disaster before or since. But Boyertown has resilience in spades. In 2002, town visionaries began to brainstorm ways to bring Boyertown back, through Building A Better Boyertown. Aside from joining the Main Street Movement, and prettying up downtown, Boyertown is home to the following can’t miss attractions: 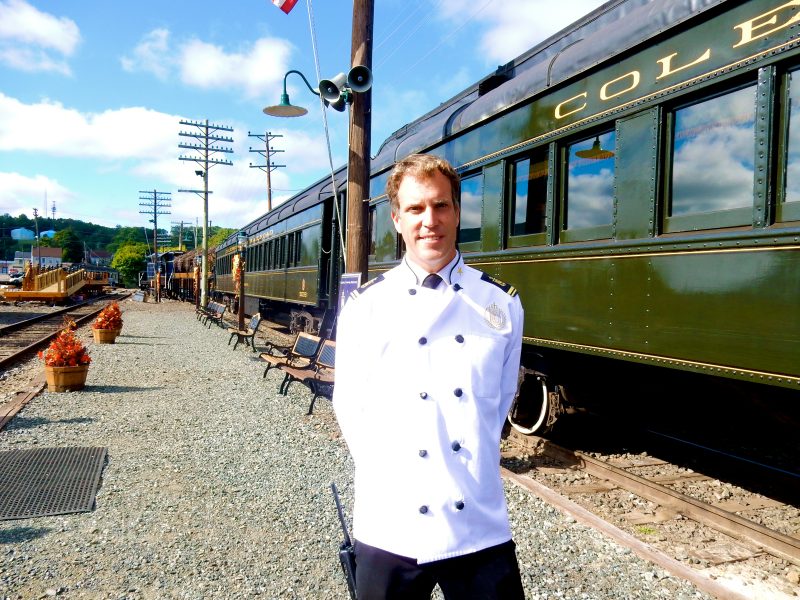 RIDE: Colebrookdale Railroad Secret Valley Line. Spearheaded by Lawyer and Historic Preservationist, Nathaniel Guest, this tourist train, inaugurated in 2014, has been attracting thousands of visitors to Boyertown from all over the world. The original rail-bed, built by returning Civil War soldiers, opened in 1869, bringing local manufactured goods to newly developing towns and cities. When these industries dried up, the rail line was all but abandoned. In his capacity as attorney, Guest fought an abandonment case and raised funds to resuscitate the railroad, turning it into one of the most preeminent year round Excursion Trains in the county, 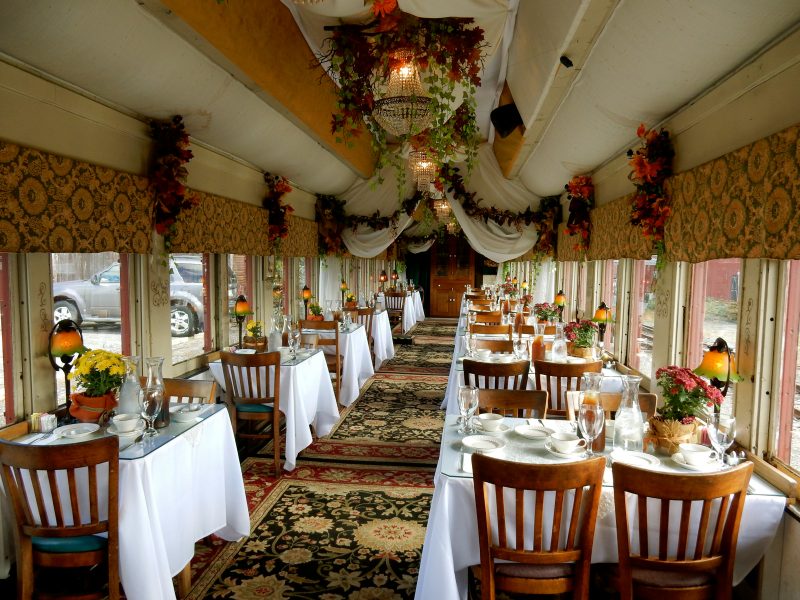 Dedicated as one of the country’s “Preserve America Stewards” by first lady Michelle Obama less than a year after it was unveiled, the 1 ¾ hour, eight mile Colebrookdale Railroad ride from Boyertown to Pottstown, with its deep cuts and tight curves, crossing tall timber trestles and rushing creeks, is one of the most stunning you’ll ever experience. 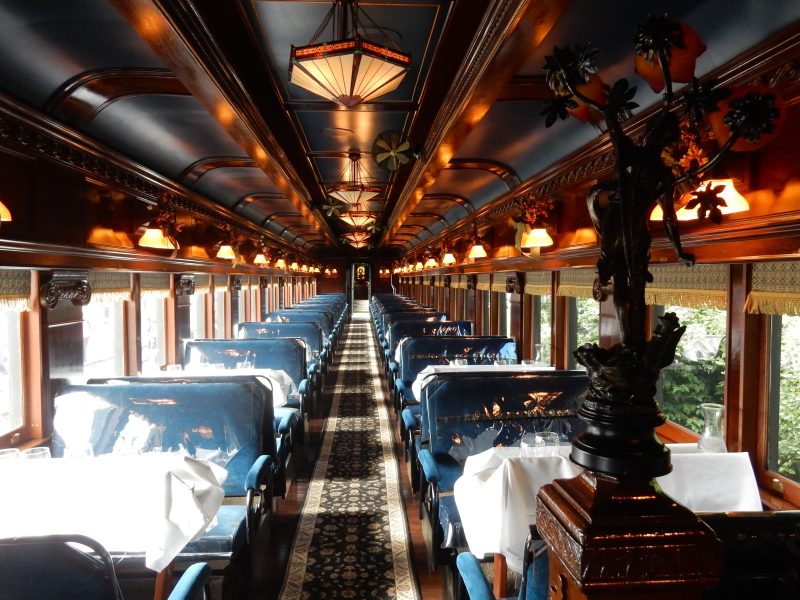 Holiday themed runs and foliage excursions are most popular, although special event trains, like Cupcake-Tasting, Mother’s Day, and Brewery-to-Brewery Tours are gaining ground. Riders in love might want to book a Valentines Day trip. “We had a wedding on the train last year,” says Guest, who also agrees it’s a great place to pop the question. “This is the only excursion railroad with an open 360 degree-view railcar that’s free for all to use – with guaranteed seats inside.” 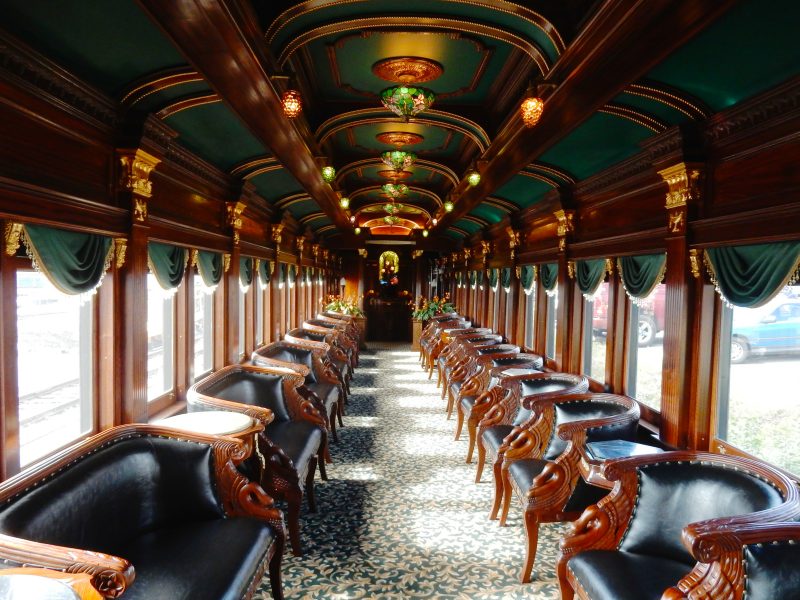 And oh, what seats they are. Pullman cars from the 1800’s have been meticulously and lushly restored, down to plush leather seating, Maxfield Parish stained glass windows, Tiffany-style lights, drapes, mosaic tile floors, and other Victorian adornments. Oak columns in the upscale Bar Car came from a theater in Rochester, with other train car appointments either replicated or sourced to represent the period. 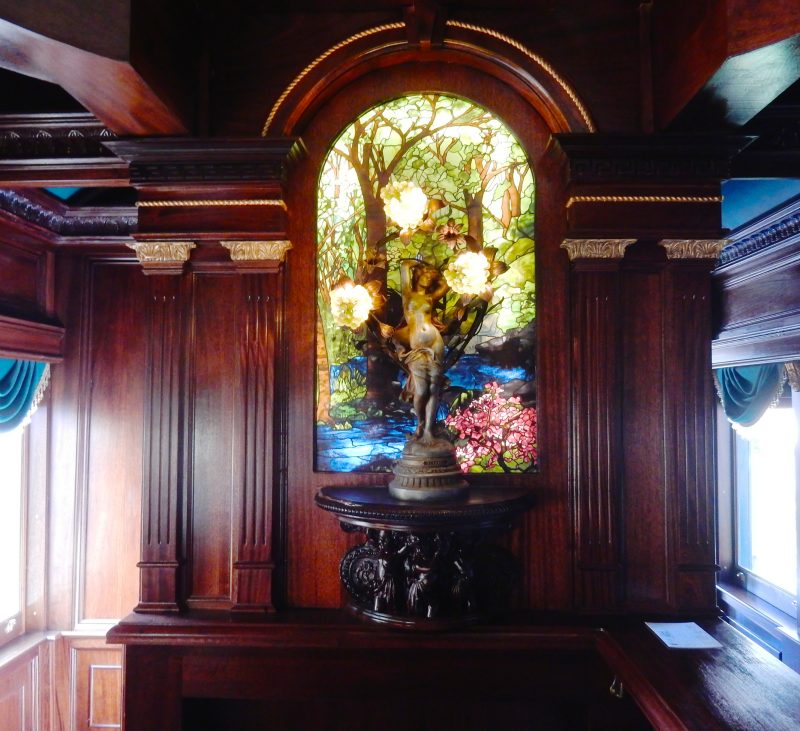 But Guest has even seen to the new Train Station and its surroundings, with fencing that came from the Smithsonian National Museum of Industry in Bethlehem PA, a Beaux Arts fountain from Detroit, and 110,000 handmade bricks discovered under asphalt in Pitcairn PA (near Pittsburgh) used to pave the new walkway. Guest, who teaches Historic Preservation at Cornell University one day a week, grew up in this area, and believed in capitalizing on what made this town unique. “Reinvesting in heritage is a wonderful way to bring people, money and investment to the area.” As a result, 14 businesses have already moved in since Colebrookdale RR opened, with more in store. Excursions run year round. Check website for schedule and RSVP portal. Tickets start at $30 adults, $45 with meal, Polar Express $45. 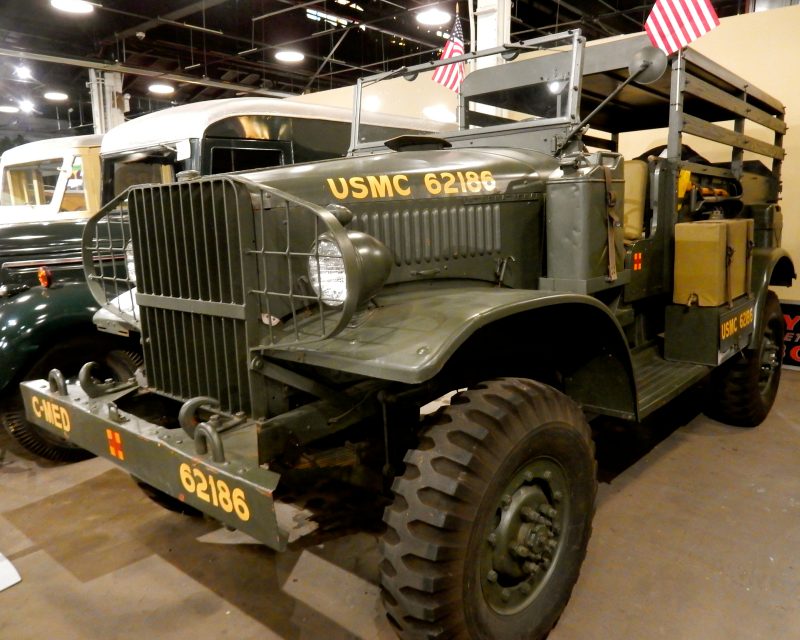 VISIT: Boyertown Museum of Historic Vehicles. Opened in 1965 in the former 1872 carriage factory turned custom truck manufacturer, you’ll find a collection of over 90 historic vehicles produced in PA, some right on site. Standouts include a white fiberglass 1952 Henry J, commissioned by a local businessman who loved boats, a 1958 Mr. Softee Truck, assembled right in the building, and a 1942 International Half Ton WWII M-1-4 Ambulance, one of 900 made in Boyertown.

The collection also includes the historic Reading Diner, a huge draw twice a year on Diner Day, when it opens to the public with food prices reflecting those of 1938 (5 cent coffee!), and an authentic 1921 Sun Oil gas station.Come on Saturdays and you can tour the original carriage factory, featuring a period machine shop and three blacksmiths (one woman!) who bang out iron carriage parts – which in the 1800’s included the wheels. Open Tues-Sun 9:30-4, $8 adults, under 15 free. 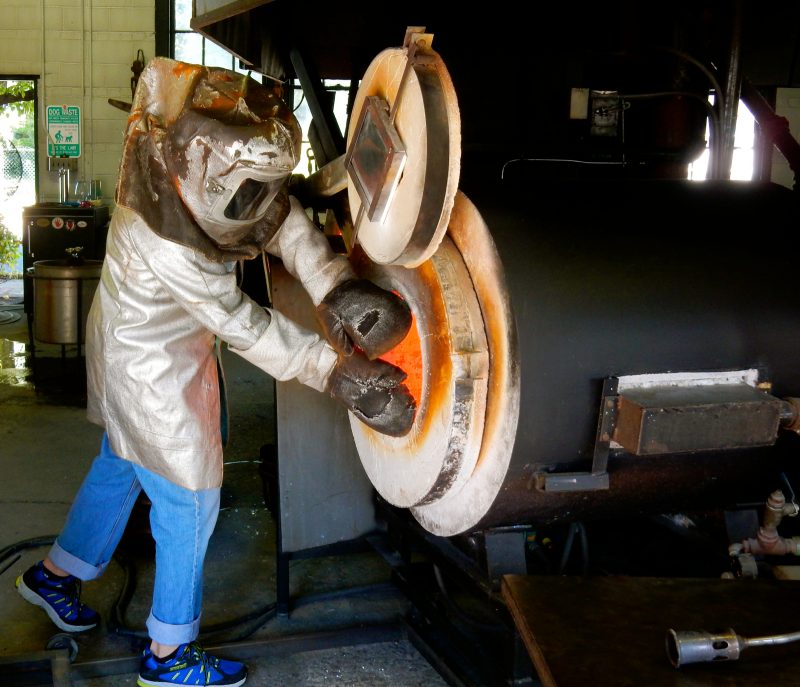 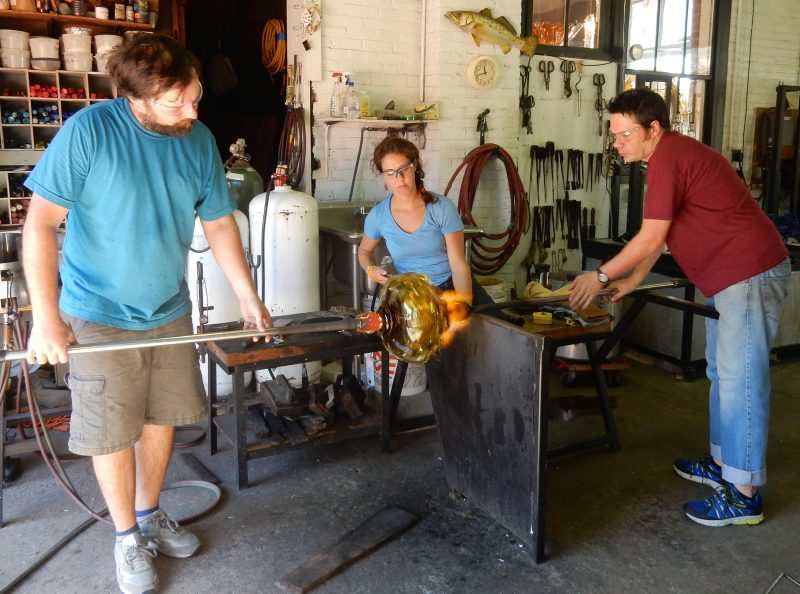 Though Dexter’s own custom lighting and designs can be found in theaters, homes, museums, and galleries all over the country (most famously in the Smithsonian, the Philadelphia Museum of Art, Corning Glass Museum, and The Colby – formerly Kodak – Theater where the Academy Awards are held), he is both a coach and creator in his own studio. Proud of his studio, Dexter invites visitors to feel the heat of several 2,150 degree Fahrenheit ovens that have been running over two years here nonstop, and see fantastic pieces being formed by his employees, Dan Alters, Tim Frankenfield and Maggie Gallen, in real time. 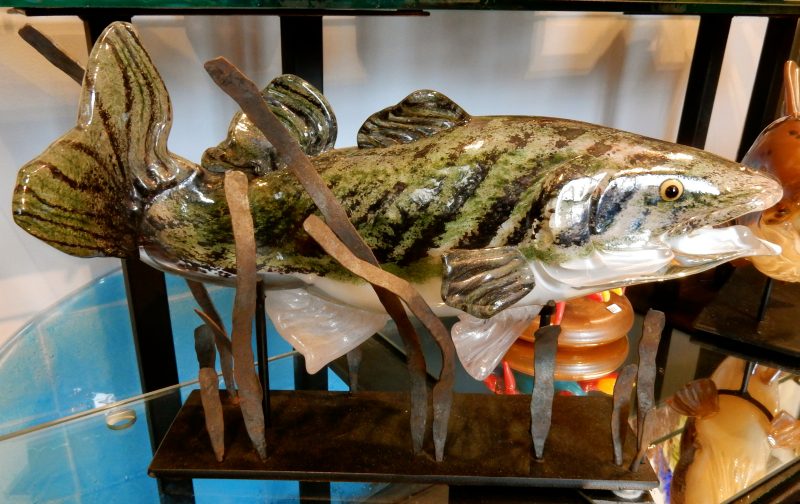 Stop in to peruse the gallery, or sign up for a workshop and walk away with your own glass creation. Open M-F 9-5, Sat. 11-5. 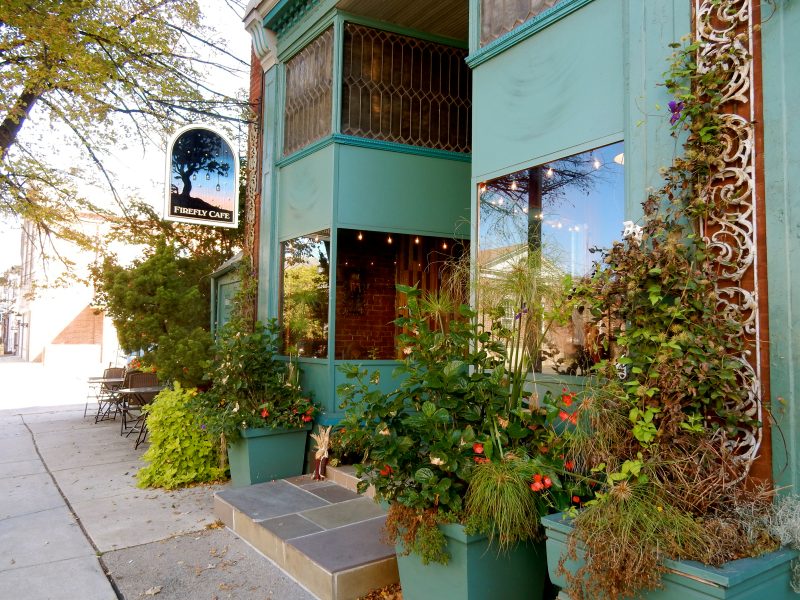 EAT: Firefly Café, Boyertown. Progressive little Boyertown recently welcomed this cute new Vegan restaurant where even omnivores can dine contentedly. The Vegan Pulled Pork Sandwich ($12) made with Jackfruit, is strangely like the real deal, but you’ll also find Vegan Mac and “Cheese” of the day, Vegie Burgers, and many other non-meat choices on the menu. 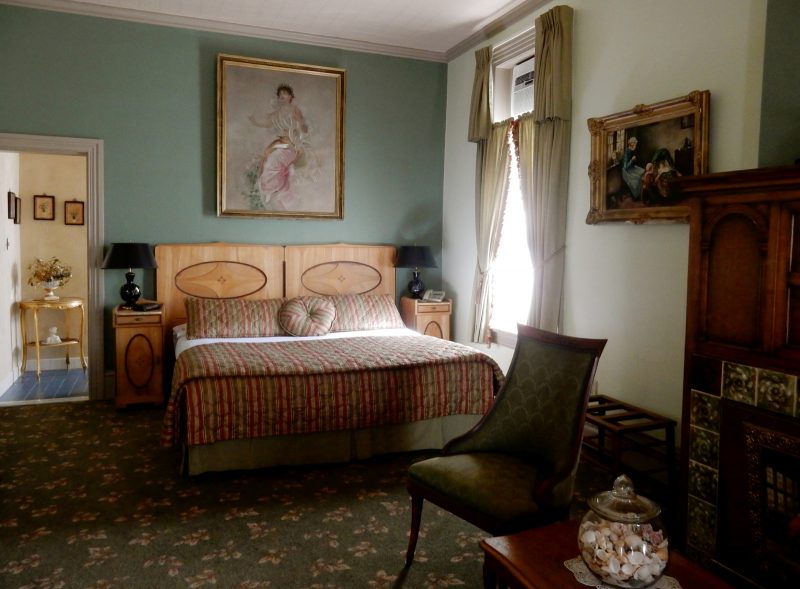 STAY: Twin Turrets Inn, Boyertown. Owned by Mayor, Marianne Deery, this ten room downtown Victorian Inn is as homey and comfy as it get – with a bit of turn of last century grandeur. Rates $124-$154 include breakfast.